The information below is meant to help you learn a little bit about who we are and what we are about. We hope that you will take the opportunity to come visit us.

Lucerne Community Church is a small community church in Lucerne, CA with a big passion for God. We are a non-denominational church, which means that we are not governed by a national or regional group. Instead, we are a self-governed community of believers.

We are a congregational-led church. As such, the organizational authority of our church belongs to its members. The members then elect leaders and call pastors to manage the organizational affairs of the congregation. While the leaders and pastors are given authority to act on the behalf of the members, they remain wholly responsible and accountable to the church members.

Historically, our property is the site of the former Lakeshore Baptist Church. However, the Baptist church and the local Evangelical Free church chose to merge and become one church body. During the course of this union, it was decided to organize as an independent, non-denominational community church. 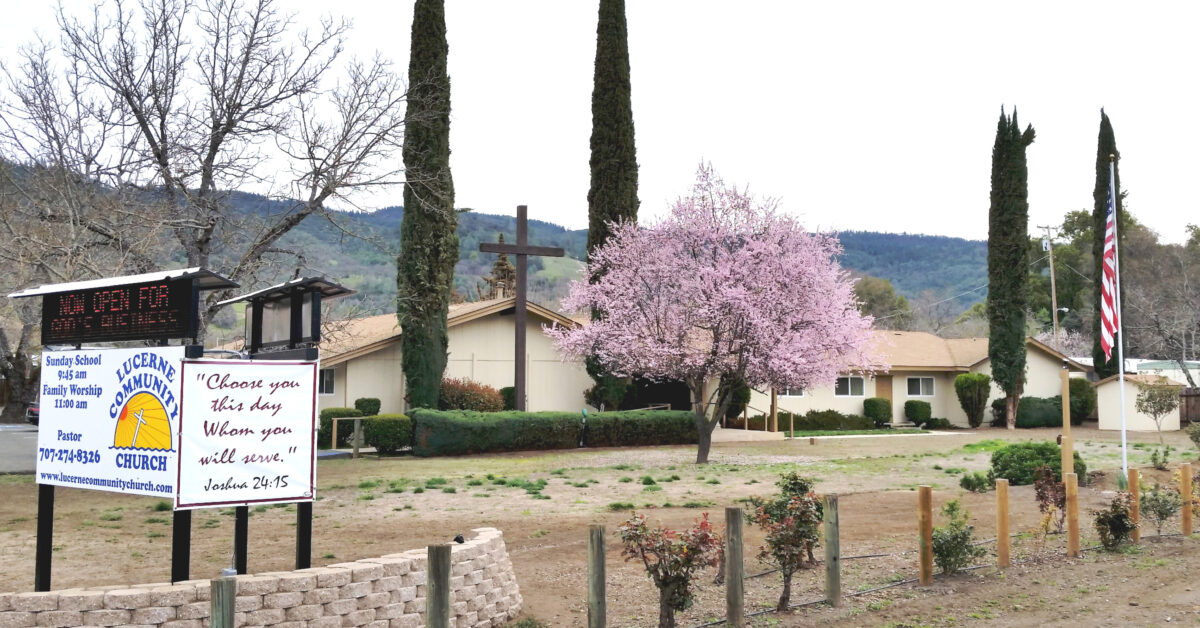 Why a non-denominational church?

Although there are benefits to membership in a national or regional denomination, Lucerne Community Church remains non-denominational in order to be more inclusive of the Christian community. Denominational membership would require agreement with theological positions we believe are secondary to the Christian faith. However, our choice to remain independent is not a necessarily a rejection of the differing denominations or any particular belief. Instead, it is a reflection of our desire to be a church of the whole community of believers. To learn more about what we believe, visit our Doctrinal Statement page.

What is a community church?

Historically, community churches were established as the population of the country spread westward. Small communities of people with differing religious backgrounds agreed to meet together and abandon their denominational ties. As the towns grew, the denominational thinking returned, and Christians separated into their denominational beliefs. It was not uncommon to have a Catholic church, a Methodist church, a Lutheran church, and a Baptist church all in the same town. Most of the churches often had no more than 50 people in attendance.

Over time, the population of towns went up and down. When populations decreased, the denominations experienced a decline in attendance. Eventually, these small churches merged and made decisions to avoid the use of denominational affiliations. In many cases, they adopted the name “Community Church.”

In the same spirit, Lucerne Community Church formed. We hold no denominational affiliation and everyone is welcome here. There is room for differing opinions here, but we hold fast to Jesus as Lord and Savior. Join us as we seek to worship the Lord in Spirit and in Truth (see John 4:24).